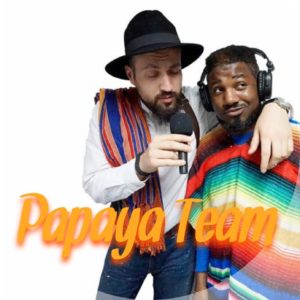 One Colombian papaya, One Jamaican papaya, Together they make the papaya team! A duo artist both here for the public’s entertainment hosting Rumi’s Cave Radio Show Rumi’s Cave is a community hub, and a cultural arts and events space inspired by the legacy of the poet Rumi. Now they are trying reach out with this new radio show! Ahmad Ikhlas is a British born Jamaican convert to Islam who has used his heritage and love for the Prophet (pbuh) to generate an expressive unique style of music and poetry. Ahmad-Ikhlas was in the underground UK garage scene (known as Mc Meelos) and always had a genuine love for music production, writing lyrics and performing. While he was new to Islam he stopped his musical ventures and it took more than a decade for him to return to performing. Isa Noorudeen is from a Latino & British background who with a creative style, in conjunction with a passion for travel, has made him form an artistic persona. His enthusiasm and dedication to establishing himself as an artist on the Urban scene coupled with his passion for photography, cinematography and web design as well as graphics & animations led him to his passions today.