… “to begin anew, in much the same way that Chinese calligraphers would change their names mid-career so they could start over: “

They would change their signature, their identity, so they could remain free to evolve artistically. 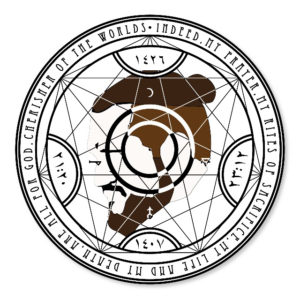 It has been over half a decade since my last emblem. even in one day we all know a lot can change; and I have decided to step back and embark on a fresh direction which I want the new symbol to represent.

Change isn’t easy but this emblem is the very spark I need to ignite the next phase.

I have carefully placed the alchemy with layers of symbolism to represent my past and how I’ve changed. The alchemy has my profile centred with elements surrounding it. On top I have placed the symbol of the moon. The moon has numerous meanings from time and cycles to illumination and transition. Illumination can leave us in the dark night with nothing to keep us company, but we remember the white moon rises above us. It’s so powerful it literally moves the tides.  The iron represents man. As mentioned in the Quran, iron was sent down from above and it is our thoughts and action that mould it. Either side  is earth and water, one of the basic essential elements of life. The sun, the source of warmth, the heart of our solar system. Where life’s energy comes from, turning what is cold and dead to the living and moving. creative energy

“To send light into the darkness of men’s hearts – such is the duty of the artist.”  Schumann

Many when they think of alchemy imagine lead being turned into gold. While in the law of physics this has proven unsuccessful thus far, in the realm of the soul it has been shown that the most dark place can be made bright.

This is a stark reminder that we have evolved and are ready to embark on a new direction.

It’s about starting anew like those Chinese calligraphers. It’s important to shed ideas and artistic tools much in the same way a tree would shed leaves. Leave a statue of your past to stand and remind you of the path you have taken but do not burden yourself to carry it.